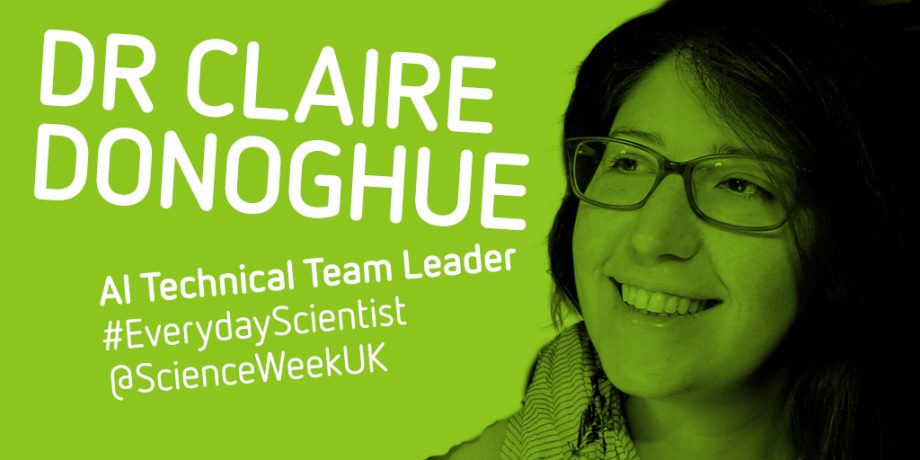 Following her degree in Computing, Dr Claire Donoghue became a software engineer in the banking sector.  She then worked in academia and gained her doctorate in Artificial Intelligence (AI) and Computer Vision at Imperial College in London, staying in academia to commercialise her research. Computer Vision is where they teach computers to interpret the world using AI. Now she works at 3M, creating AI and Computer Vision concepts, working on things that improve people’s lives.

I had an interest in science and doing experiments at school and looking back I always had a love of puzzle books, where each page had a new one to solve. That initial interest is very similar to what I do now. My job is about identifying problems and then working out how to solve them using technology, combining my maths background with problem solving.

When primary school pupils ask me what I do as a computer scientist, it’s easy. I tell them I’m an inventor, and someone who gets to use the science they learnt at school and combine it with my creative side. They love the description, because they usually don’t think of an inventor as a job in the real world. They picture it as something straight out of a cartoon, so they are immediately captured by that.

I am very lucky to have a job that fuses science and creativity. When you’re at school, you often learn in silos – English, Maths, Science. When you’re starting to create new things, you end up drawing from all of these different fields and diverse thinking is really important.

When I first started my career, I joined a team of 50 people and I was the first female in the group. I was part of a new demographic and it was a challenge at first until people got to know me as an individual – an everyday scientist like them.

STEM needs diversity of thought and perspective and the good news is that this is increasing. It’s something I am very passionate about, which is why I developed the ‘London Geekettes’, a group which organises events to showcase the work of inspiring female scientists and engineers.

The type of job I do now didn’t exist when I was a child. Similarly, we have yet to imagine all the things that technology will enable us to do in the future! That thought inspires me and is the reason I love my job. I believe everyone has the potential to learn and grow in an area that excites them and maybe become an inventor like me, too.

Click here to learn about more scientists who are Smashing Stereotypes!

The campaign was made with the support of 3M.

Download the 2021 activity packs now, with our special 'Innovating for the future' theme!